With Sherloc, the Quilted Stratum Process (QSP®) is put to test in the aeronautics sector 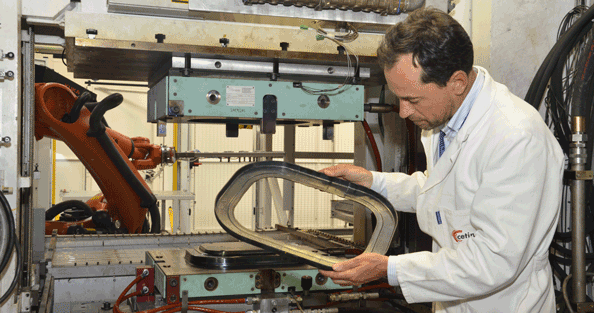 Cetim was selected to manufacture five composite aircraft window frame demonstrators as part of the Sherloc European project. These parts and the first results will be displayed in an exclusive presentation during the JEC World2019 trade fair.

First the car manufacturing sector and now the aeronautics sector! Within the SherlocEuropean project (Structural Health Monitoring, Manufacturing and Repair Technologies for Life Management of Composite Fuselage), Cetim proves that it is now possible to make composite parts for the aviation sector at production rates and cost levels that are compatible with series production. Demonstrators will be displayed on Cetim’s stand during the JEC World2019 exhibition. A video showing the manufacturing of these demonstrators is available on the Cetim France YouTube channel. Moreover, on the 12 thof March, from 9:55 a.m. to 10:20 a.m., Cetim will hold a conference to present the results of this work.

Initiated in 2015 and scheduled to end in 2022, the Sherlocproject is part of the Clean Sky 2 programme (the biggest aviation research programme ever launched at the European scale) and aims to develop and assess non-destructive testing techniques which can be used to monitor composite parts of regional aircraft. To that end and as part of a sub‑project named Sherloc QSP, Cetim was selected by the Imperial College of London (the Sherloc project coordinator) to design and produce five demonstrators of aircraft window frame and skin fuselage assemblies made of PEEK and carbon fibre that will be bench tested within the scope of the project. Therefore, the window frames are produced using Cetim’s high-speed thermoforming process, named Quilted Stratum Process (QSP), and bonded to a fuselage skin. The advantage of this process is that it makes it possible to obtain “Net Shape” parts right from the thermoforming step, that is to say parts which do not require any finishing operation. The production cycle is also considerably faster than that of conventional processes, to the point that making 50,000 parts per year and per production line seems to be possible.

We use cookies to ensure that we give you the best experience on our website. If you continue to use this site we will assume that you are happy with it.Ok